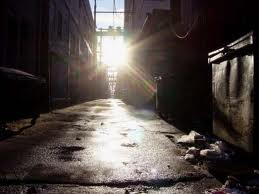 When Joseph’s brothers arrive in Egypt they fail to recognise the sibling they sold to traders and they come expecting to simply purchase grain and return to their father with food for the whole family.

However, this is not quite how things worked out. Joseph questioned them about the whereabouts of his youngest brother Benjamin who had been left at home. Then he agreed to give them grain but kept one of the brothers’ hostage until they returned with Benjamin. Finally, on the way home they discovered that all their money had been returned to them!

In the New Testament, Jesus returned to Nazareth where he was greeted with rejection by his own people who refused to believe in him, in spite of his enlightened preaching and many miracles.

Today we often hear people describing what Jesus would do in any given situation. But we forget that God does not think the way we do and He is full of surprises. In fact, we should be careful about what we pray for as God hears all our prayers but often answers them in the most unexpected way.

In the psalm we are urged to trust in the Lord who will rescue us in our distress and light up our darkness.

Error: Twitter did not respond. Please wait a few minutes and refresh this page.