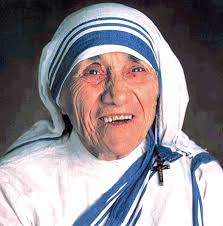 Today, September 4th, 2016, Pope Francis declared Mother Teresa of Calcutta a saint during the celebration of Holy Mass in the presence of thousands of pilgrims in St Peter’s Square, Rome.

Much has been said about Saint Teresa, some true, some unkind, but my overwhelming recollection concerned her death on September 5th, 1997. In the UK and other parts of the world, the media was full of stories about Diana, Princess of Wales who was tragically killed a few days before on August 31st in a car crash in Paris.

Whilst the world mourned Diana, Saint Teresa simply slipped away unnoticed. That in itself is a mark of sainthood.

St Teresa of Calcutta, pray for us.

Error: Twitter did not respond. Please wait a few minutes and refresh this page.